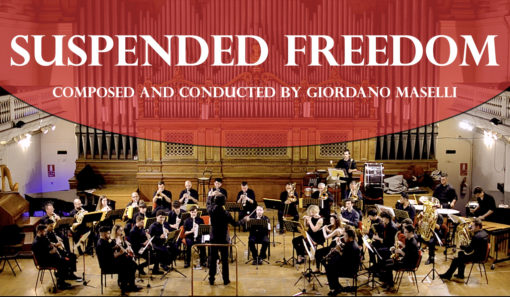 ‘Suspended Freedom’ is a piece composed by Giordano Maselli between 2017 and 2018.

It is dedicated to the students and the professional workers members of the Santa Cecilia’s Symphonic Band, which firstly performed this piece in a live concert on June 15th, 2018.

The title is related to the harmony of the piece, which is in fact based on suspended chords made of fourths and fifths that never lead to any final chord.

During the initial oboe solo, a fifth gets added in each bar, and the three chords so formed will be the base to the piece’s ending as well.

As for the concept of Freedom instead, it is purely creative matter. The music revolves around three styles (tonal – counterpoint – modal) that freely alternate and are different evolutions of the same melody, varying it to different degrees.

The orchestration, even if mainly made by Maselli, is the result of a collaboration with Maestro G. Pocorobba, that reviewed the score several times and was vital to perfect the balance and ideate the different layers of sound.

Maestro Pocorobba himself was the live concert organizer, and the performance was also the chance for young conductors, including Maselli, to conduct pieces by G. Verdi, F. Liszt, G. Manente, Ed Huckeby, E. Gregson, O. Respighi.