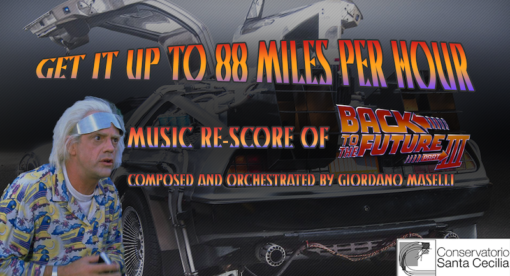 It felt like it was never going to happen, but that day has finally arrived. I finished studying at Santa Cecilia Conservatory of Rome on October 12th, 2018, graduated with full marks and honour in both Classical Composition and Movie Soundtrack Composition.

I like to share here with you my composing work for the final exam of my two-year Master’s Degree in Movie Soundtrack Composition.
It’s what in the USA would be called a Re-Score. It’s an excercise that consists in composing a new music to be synced with a sequence taken by a well-known movie.
When I chose to re-score the whole train sequence from Back to the Future Pt. 3 I had probably no idea of what I was doing…

Started in July and finished in October, “Get It Up To 88 Miles Per Hour” represents for me a process of technical experiment both in composing and choosing the right sound samples.
The score was entirely written in longhand. I had given myself the goal to complete 30 seconds of the score a day.
Through my Daw I used to set all the signatures beforehand and mark them, so to have all the hit points in the right spots. After that I would export the score with all its empty bars directly from the Sequencer to be able to compose knowing in advance what the signature changes were going to be.
After finishing the sketch I would orchestrate it all and finally record the whole thing with virtual instruments.
This process, which is quite longer than the one I usually adopt, allowed me to ponderate with all the ease each single scene and to experiment new composing techniques such as Fugatos, Aleatory Composition, Politonality, unconventional modulations and transitions, etc.
Of course I spent many hours studying Alan Silvestri’s composing strategies.
The most interesting aspect, which I intentionally kept in my own version of the score of this particular sequence, is the fact that Silvestri’s music variates according to the different characters facial expressions.
For instance, in the first bars the music switches from mysterious to frenzied after it’s heard from the distance the whistling of the train that Doc and Martin are to divert.
This switch in the music doesn’t take place right after the train whistles, but when Doc and Martin realize they’ve got to hurry up if they want their plan to succeed.
Contrariwise, when the kid shows up and gives Martin his Colt, the music stops before the dialogue.
Who’s watching understands that something has changed even if the movie characters haven’t realized yet that there’s a kid calling them from behind their back.
Quite an interesting move-up trick…

My score is organized in 4 parts, all separated by a narrative context but practically arranged for a possible live recording session.
The second part is the one I’m mostly fond of. It starts with the love theme and it turns its music mood from action to Emmet’s feelings.
Before the blow up, as Emmett and Clara are on one puffer’s side and are trying to reach to each other, I chose to repropose the love theme exactly as it is heard at the beginning but with a different orchestration, a more frenzied mood, a counterpoint in the middle section of the orchestra and an harmony that progressively switches from consonance to dissonance, as if predicting the characters are not going to make it.
That is the spot I mostly enjoyed composing: I wrote it and completely changed it and rewrote it from scratch three times within the same day. 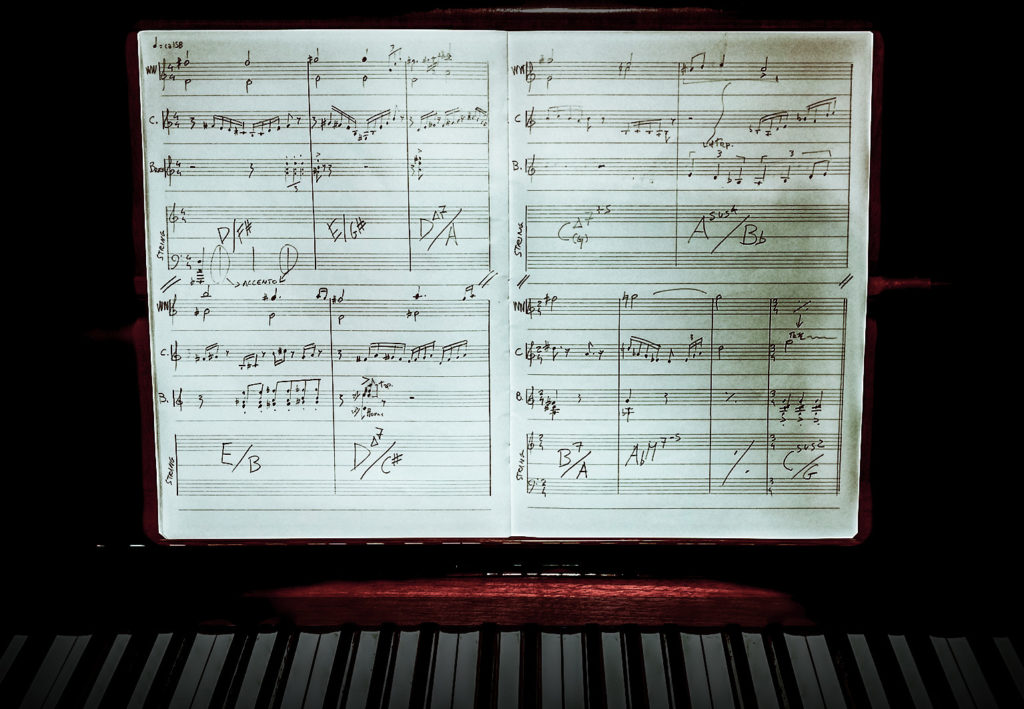 In the virtual production there’s no programming, each single instrument was played and not quantized.
Almost the entire orchestra is made of new libraries of sounds I collected through a long time, like the East West Hollywood Orchestra, the Vienna Symphonic Library, the strings from Musical Sampling, VI Labs TruePianos, 8Dio Agitato, etc.
Some sound samples I made myself: recently I have been recording some of my friends sounds with the purpose of sampling their instruments, and some of the results are present in this score!

The organic is definitely Hollywood style:

Unluckily I haven’t been able to leave dialogues and movie sounds in because they were mixed together in the same track that also includes Alan Silvestri’s music.
That is the reason why in the final version of the score I had to remove the whole original audio track from the sequence. And yet, even though dialogues out of scene and sound design effects are not present anymore, I considered them when re-scoring the whole movie sequence.

In the video you are about to watch, these spots will be put under your attention thanks to lightened messages in the upper right corner of the screen. Italian subtitles have been added during the dialogue parts as well.

I wish you to enjoy listening to it and of course I’ll be looking forward to receive all of your comments.