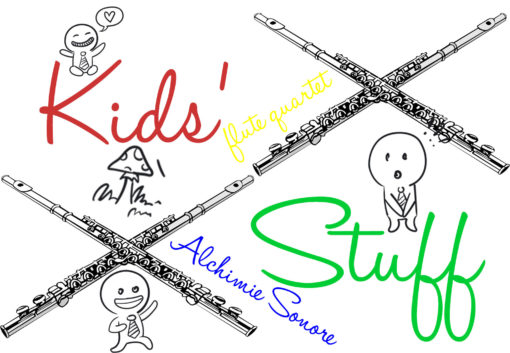 “Kids’ Stuff” is a piece for an ensemble of four flutes in C specifically composed for the ensemble “Alchimie Sonore” of Santa Cecilia Conservatory. The members of this ensemble are all students of flute teacher Francesco Baldi, who’s also commissioned the piece.

Its provocative title, being the piece not really a good fit for beginners level, sets the piece in a childlike and playful context. “Playing” is the fundamental concept to the creative fulcrum of the piece and also is the only guideline that Maestro Baldi gave me. The idea was to compose a short two-themed piece of music imagining four kids playing together and chasing each other randomly, just for the sake of being happy and carefree.
I still remember when I used to play with my friends in grade school and at a certain point all of the sudden we got tired of following the old traditional game rules, too stressing! So we’d start playing randomly, usually running around, jumping and laughing. It’s that kind of carefree state of mind that I took inspiration from, to create a music in which every kind of harmonic or rhythmic tension relaxes and lands to something instinctive, simple, and most of all in which the different parts never fight against each other but just complete each other and create union, just as four kids playing the same game at the same time.

It was with great pleasure that I attended almost every rehearsal of the flute ensemble, the members (Davide Stanzione, Alessandro Pastena, Francesca Duca, Alessandra Prozzo) have revealed themselves as great professionals.

Here below you can find the video of the performance that took place on May 4th, 2018, Kids’ Stuff first performance ever.