The Man In The Glass – Stairs Of Life (Album) 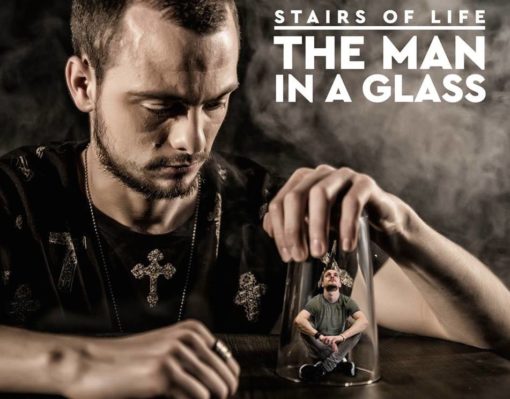 Italian Alternative Rock band, Stairs Of Life was formed a year ago by multi-instrumentalist Luca Aldisio. After several trials and tribulations, experiments and line-up changes, the group dived into the studio to start recording. The mini album named “The Man In A Glass” was recorded in Maselli’s Studio in Rome at the beginning of 2017 with the exception of the drum tracks which were recorded by Fabio Vitiello in his studio in Florence. Luca had a precise project in his mind, so he and I worked together on the arrangements so that it would sound like it has come from inside us. I played Bass Guitars, Keyboards and Synthesizers. Of course Moog and the Access Virus B could not be missing because I really love them!
Alessio Erriu played all the Electric Guitar parts, he is a really good player and I love his sound.
The final mix and the mastering was made by Luca Pellegrini at the Bonsai Recording Studio, an awesome studio in Orvieto.
The Man In A Glass, has influences from all types of rock from Progressive through to Psychedelic finally creating a type of Rock Alternative.

The lyrics are inspired by different day-to-day topics and stories: for example, The Man In A Glass talks about alcohol abuse as a mean to defy reality – hence the play on words. Our Lady Of Grace refers to a local legend about “La Madonna di Nettuno”, the famous statue in the band’s hometown. Legend has it that, whilst on the way to Naples from the harbor of Ispwhich, a massive thunderstorm forced the ship transporting the statue to dock in Nettuno – where Our Lady Grace remains to this day. This episode was interpreted as a sign of Our Lady Of Grace’s will to settle in Nettuno.
What has inspired the writing of Mask, is the human need to sometimes wear a “mask” in order to conceal our feelings or longing for another person’s company, while You Are Gone expresses all the sadness that comes from losing a loved one. We always hope that, wherever that person may go (some place else, if not the afterlife), he or she may keep us in their memory.

The Man In A Glass will be released on November 3rd through Sliptrick Records.