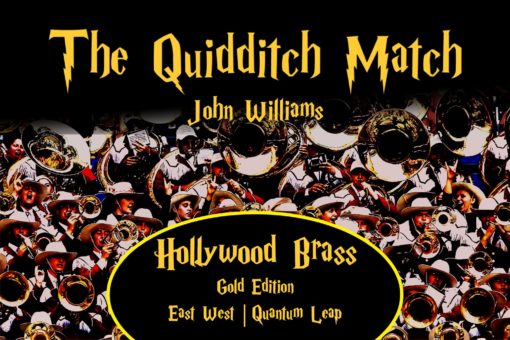 Today is American Composer John Williams’ Birthday! As well as wishing him many good wishes for his 85th birthday, I had fun playing one of the pieces he wrote for Harry Potter soundtrack using Hollywood Brass from East West. To be specific, I’m talking about the first part of “The Quidditch Match” from HP and the Sorcerer’s Stone (5m4 pt.1).

The structure of this track is very complex, it has a lot of tempo and metric changes, the musical texture and the orchestration vary very often. I chose this piece because the brass instruments are the main element of the orchestration. I only played the brass section for two reasons, to save-time and mostly to let you listen to how this amazing library sounds when it is not hidden by 800 other instrument tracks.

Everything has been made with the Gold Edition. The Gold Edition version, for those of you unfamiliar with it, is the reduced version of the Diamond one: less mic positions; 16 bit samples instead of 24 bit; a little bit of background noise etc… But at the same time it is much lighter and ideal for those who do not have a very powerful computer in order to produce orchestral recordings.
Compared to Hollywood Strings, which I had already talked in another post, Hollywood Brass has more background noise, especially when playing gently.

I used the following patches:

The Mod Speed patches are awesome, they allow you to switch from a very short sound to sustain using the Modulation Wheel, while the dynamics is controlled by Expression. I used a midi pedal for Expression value so as to be able to perform in real time the part without editing it after the execution.

In this test it is not possible to appreciate the legato sounds, but I can assure you that they’re wonderful, especially the French Horn’s legato is very realistic. Even if they are beautiful, legato patches are difficult to play because of the delay. After a while you get used to it, however it’s inevitable having to do some editing after the execution.

Compared to the other brass libraries I think that Hollywood Brass is really good, it has a great and power timbre (sometimes it’s even too powerful if we want to record something very smooth). At the same level of the H. Brass I can mention only Cinebrass, which is still the easiest to use.
Weaknesses are:

With the exception of these few weak spots, it’s a great library to buy and it is a pleasure to use!

No EQ/Compressors have been used in this recording and all sound samples are from HB by EastWest.
I have used “Altiverb” as a reverb and a short FX chain for mastering.