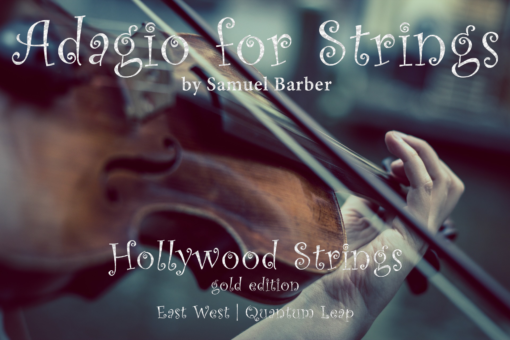 Recently I have purchased some of the EastWest bundles and one of them is the “Hollywood Strings Gold Edition”, one of the best VST strings libraries of the latest years.

The Gold Edition version, for those of you unfamiliar, is the reduced version of the Diamond one: less mic positions; 16 bit samples instead of 24 bit; a little bit of background noise etc… But at the same time it is much lighter and ideal for those who do not have a very powerful computer in order to produce orchestral recordings.

Since I have been using Hollywood Strings I have always tried reproducing some famous tracks, so I have focused my attention on one of the most challenging tracks to be reproduced with virtual instruments. I am referring to “Adagio For Strings” by Samuel Barber (1936), a really expressive and dynamically-rich music.

The original track lasts 10min, but I have realized a brief version since it is an experiment.

The first thing I got to say is that using HS for this music style is definitely unsuitable! Because:

Probably this challenge would be more meaningful and interesting using the library “Adagio” by 8Dio, but since HS is really versatile it could work well too for this type of orchestration in my opinion.

No EQ/Compressors have been used in this recording and all sound samples are from HS by EastWest.
I have used “Altiverb” as a reverb and a short FX chain for mastering.